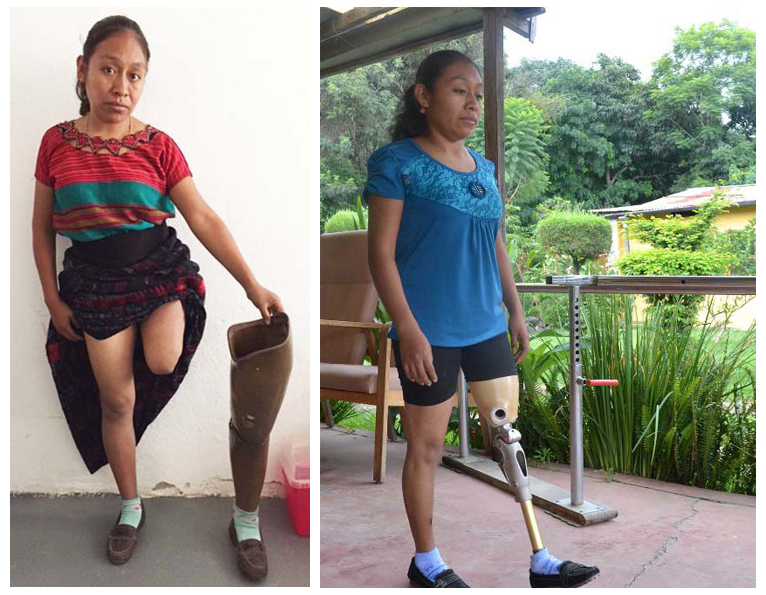 Refuge International volunteers met Katarina for the first time at the Chocolá clinic in 2015. After standing in a long line of patients waiting her turn to see the doctor, Katarina limped to our exam table and lifted her skirt to reveal a beautifully carved wooden leg, extremely worn and cracked from years of use. When Katarina was a young teen, she was in a car accident and subsequently lost her leg to gangrene. Now in her late 20s, her homemade leg had become extremely painful to use due to its significant weight and repairs that were made with wires and metal plates, which consequently rubbed on her leg stump. In order to seat her leg into the wooden prosthetic, Katarina used a belt, wrapped tightly around the stump, then fed through a hole drilled into the wood. She pulled for all she was worth to fit her stump into the socket.

Through sheer courage and tenacity to seek a better way of life, Katarina left her very remote village alone and made her way to the Refuge clinic. Katarina believed if she could get a new prosthetic leg, not only would she be able to work, she might even have hopes of marrying one day. Typically, a prosthetic leg with an articulating knee costs $7,000-$10,000, an unattainable amount to someone like Katarina. However, Refuge International volunteers decided to contacted Transitions, a non-profit organization in Guatemala, and found that a prosthesis could be purchased for Katarina for just $2,086. Refuge volunteers immediately created a GoFundMe campaign and in just 13 days, 23 generous individuals contributed the full amount. Refuge is in the process of getting Katarina her new prosthetic leg, and we are so thankful to our community for giving Katarina a fresh start and the opportunity to build a whole new life!