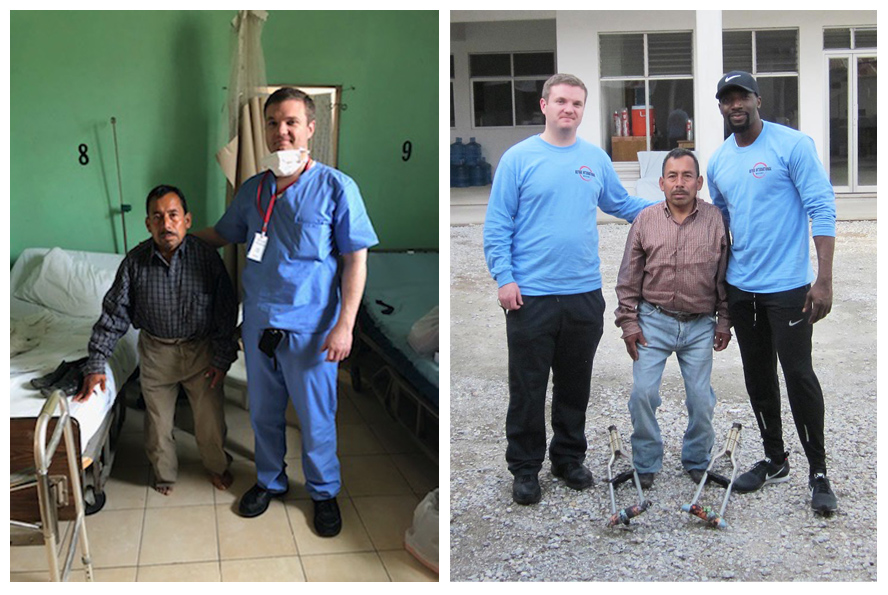 I met Gregorio during the summer of 2011. I was serving as a proselyting missionary in Chinique, Quiche. When I met Gregorio, he was living in a house made of cardboard. The walls and ceiling were made of cardboard boxes that had been unfolded, supported by some sort of bamboo poles in the corners. As you can imagine, this did not keep out the torrential Guatemalan rain.

Five years earlier, at the age of 41, Gregorio was injured in a fall down a ravine and since that time he had been unable to work. His wife chopped firewood and carried it on her back to earn money and support themselves. One or two years after I met Gregorio, his wife passed away. When I asked him if he had seen a doctor, he said that he had already had two operations on each of his knees in Guatemalan hospitals, but his condition did not improve. He walked with difficulty, and was plagued with constant pain that kept him awake most nights.

When I finished my mission and returned to the U.S., I could not forget about Gregorio. His condition bothered me. It was hard to enjoy a comfortable bed, good food, and good health when I thought about how hard Gregorio’s life was. I felt guilty that I was never able to help him get better.

Almost 7 years later, in January 2018, I started looking online to see if there were any volunteer groups from the U.S. that performed orthopedic surgeries in Guatemala. I was elated when I found Refuge International! I hoped that they would be able to help Gregorio. Contacting Gregorio was tricky as he does not have a cellphone or email account, but with the help of missionaries in Chinique I was able to make contact with Gregorio and ask if he would be interested in seeing an orthopedic surgeon in San Raymundo (where Refuge International had an upcoming orthopedic medical mission team scheduled). When he said he was interested, my parents contacted a good family friend from Chichicastenango. They arranged for Gregorio to get x-rays in Quiche, and for his transportation to San Raymundo. I also signed-up to be a Refuge International volunteer that week.

Dr. Parker, the lead orthopedic surgeon, and the entire team worked a miracle on Gregorio’s left leg! After the surgery, I asked Gregorio if he had ever thought he might be able to walk without crutches again. He told me that had never crossed his mind. He is extremely grateful for what Dr. Parker, his team, and Refuge International did for him, and he is hopeful that the surgeons in Antigua will be able to operate on his right knee. Nothing I can say would be sufficient to thank Refuge International, Dr. Parker and the entire team. Gregorio has lived with pain and disability for 12 years, but he now lives with hope. You have done more than given him a new knee. You haven given him new life.

For me personally, this has been one of the most rewarding experiences of my life.